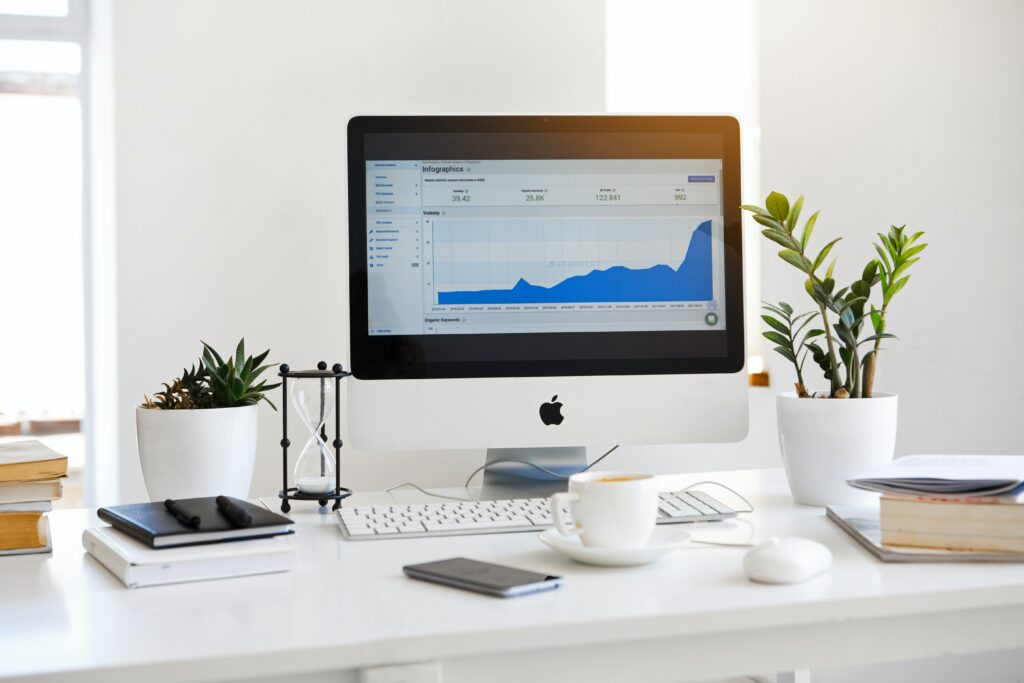 When people talk about how to set up Facebook Ads, they have previously attributed success to targeting (that’s your audiences). Yes, nailing your Audience is very important as you should always be communicating with consumers who are interested and in need of your product or service. But, with Facebook comes something no other advertising channel allows: Conversion Optimisation. AKA, targeting people who are most likely to take actions in the consumer funnel.

Facebook doesn’t show your ad to every person on your audience. Your ads are only shown to a small segment of that audience. Knowing this, you’d want that segment of the audience who are shown the ad to be the most interested, and actionable consumers… so you can make more sales. With Conversion Optimisation, you can make sure your ads are served to these people.

So how does it work?

Essentially, Facebook has so much data on each individual user, that it is now possible to target people based on how they are predicted to act when served your ad. When you set up a Facebook ads Gold Coast, you can now tell Facebook to optimise your ad for ‘Add to Cart’ clicks or ‘Initiate checkout’ clicks, even ‘Purchase’ clicks. So, with a defined, targeted audience, and optimisation for conversion you’re well on your way to a successful Facebook ad campaign.

We've seen Conversion Optimisation work before our very own eyes!

Trust us, we have seen how tweaking conversion optimisation has completely turned a Facebook campaign around. We ran a Facebook campaign for a client whose aim was to make more online sales. In setting up the campaign, we initially selected the goal ‘Traffic’ and directed consumers to the product page on their client’s website. We’d selected this goal, because we wanted to drive much traffic to the website as possible. But we didn’t consider if that traffic would be likely to purchase. After a few days, we’d only had one sale, and so we investigated what we could do better. Then we found this article about ad optimisation. After tweaking the campaign to have the goal ‘Conversions’, and to be optimised for the ‘Add to cart’ conversion event, 70+ orders were placed within a week. We were amazed with the result of a simple tweak.

So, now that you’re convinced Conversion Optimisation is going to be your new best-friend, let’s dive into how to set up ads that will make your money well worth it.

Set up your Campaign with the goal ‘Conversions’ 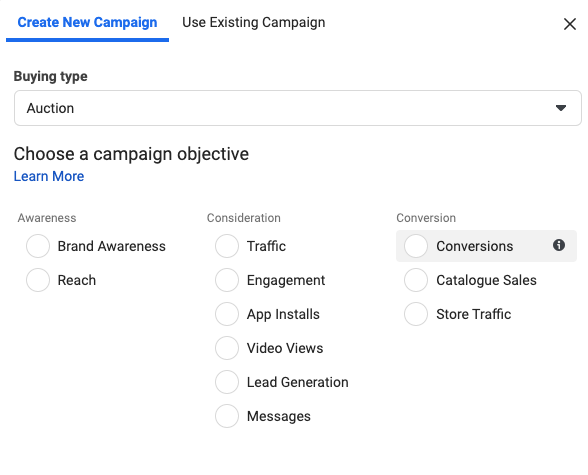 Now that your campaign is set up for conversions, you’ll need to select a conversion event in the Ad Set. This is a certain action a consumer takes on their path to purchasing a product and works alongside the Consumer Funnel (a nifty marketing model we still use all the time). The conversion event is where you’ll choose what action you want your audience to take. 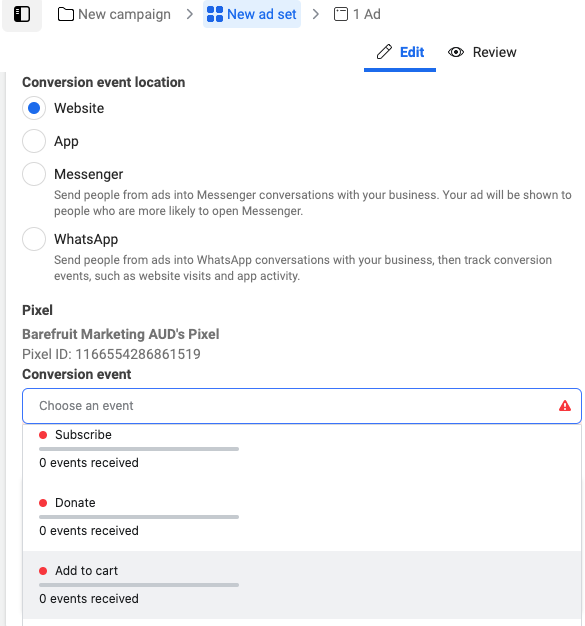 Now, generally speaking, we’d want people to purchase your product, so choosing the event ‘Purchase’ seems obvious. Well, actually, you’ll miss a heap of people who might be interested in your product by selected such a small segment. Referring to the Consumer Funnel below, you’ll see that at each ‘conversion event’ you move through you lose consumers along the way. Hence, the upside-down triangle, indicative of the market size for each event. 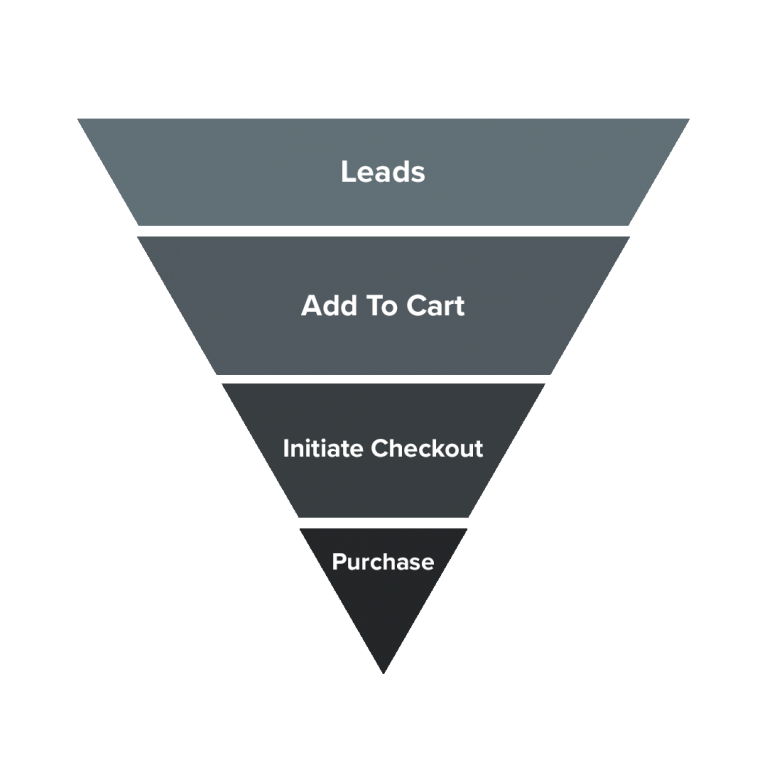 If you’re looking to reach a lot of interested people (and especially if this is your first-time advertising on Facebook), choose either ‘Leads’ or ‘Add to Cart’. If you are running a retarget ad, you’ll want to choose an event further down the Consumer Funnel, because you know they already are interested in what you are selling. Facebook’s rule of thumb is that you need to select an event that is being completed at least 15-25 times a week. Why? Because Facebook uses the data from goal completions to help place your ad in front of consumers who are predicted to act in the same way.

This website uses cookies to improve your experience while you navigate through the website. Out of these, the cookies that are categorized as necessary are stored on your browser as they are essential for the working of basic functionalities of the website. We also use third-party cookies that help us analyze and understand how you use this website. These cookies will be stored in your browser only with your consent. You also have the option to opt-out of these cookies. But opting out of some of these cookies may affect your browsing experience.
Necessary Always Enabled
Necessary cookies are absolutely essential for the website to function properly. This category only includes cookies that ensures basic functionalities and security features of the website. These cookies do not store any personal information.
Non-necessary
Any cookies that may not be particularly necessary for the website to function and is used specifically to collect user personal data via analytics, ads, other embedded contents are termed as non-necessary cookies. It is mandatory to procure user consent prior to running these cookies on your website.
SAVE & ACCEPT